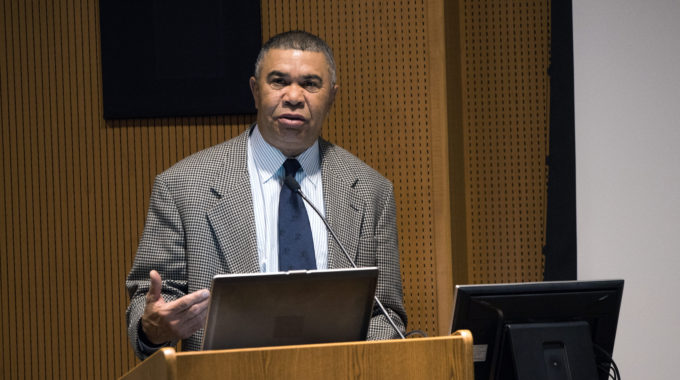 VLAA’s Censored at the US Capitol: Pulphus v. Ayers and Its Implications, April 30, 2018

Good afternoon everyone and thank you for that kind welcome.

First of all, I want to thank Sue Greenberg and the Volunteer Lawyers and Accountants for the Arts for taking a stand in defense of David Pulphus and his 1st Amendment Right of self-expression.

David is not only my constituent; he’s also a remarkable young man.

When I first met him almost two years ago, it was obvious to me that he had great artistic talent, and his winning entry in the congressional art competition, “Untitled #1,” reflected that.

But what I could not have known then…is that his abundant talent is matched with great courage and determination to stand up for his rights against those who would deprive him of free speech for their own political purposes;

And against the hateful, intolerant, racist cowards who have threatened him repeatedly because he dared to paint what was true for him.

This case, which is currently pending at the Federal Court of Appeals in the DC Circuit, is a fundamental test of the 1st Amendment.

But beyond that…this case is about something more basic…

It’s about whether the elected servants of the American people who are sworn to uphold the Constitution are going to defend those rights or will they suppress the 1st Amendment right of a young American…in of all places…the very citadel of our democracy…the U.S. Capitol.

For those of you who may not be familiar with the facts of the case:

Here in St. Louis, the winner is chosen by an independent panel of art educators, professional artists and gallery owners, who have real expertise in the field. The first place winner wins a trip to Washington, DC where his or her work is displayed at the U.S. Capitol Complex for an entire year…a great honor for any young artist, regardless of the subject.

It was reviewed accepted by the Architect of the Capitol and put on public display with the rest of the winners from across the nation. David’s work was on public exhibit for seven months without complaint or concern from anyone.

Late last year, an alt-right blogger conspired with a former host at Fox News Channel to whip up a cable and internet firestorm to demand that it be removed.

That resulted in multiple thefts of the painting perpetrated by certain ethically challenged Members of Congress who wanted to use this manufactured controversy to mask their own misconduct.

And sadly, when faced with political pressure from the Speaker of the House, the Architect of the Capitol committed an act of retroactive censorship and ruled that David’s painting was in violation of the contest rules…even after it had been previously approved for public display by his own office.

Of course, we sued in federal court.

We were unsuccessful in the opening round, but that case in pending on appeal, and we expect oral arguments this fall.

David Pulphus, is a great young man. He is academically gifted, artistically talented and is now enrolled in college.

David is doing everything that we encourage young Americans to do…to become successful citizens.

His winning entry was a colorful, symbolic representation of the great anger, pain, frustration and deep deficit in trust for local law enforcement that many young African Americans feel in their hearts.

The painting also reflects generations of struggle, sacrifice, abuse of power and tenuous relationships between minorities and a system of justice that still provides equal justice for some…but not for all.

So the larger, much more fundamental question is…Why does this young American feel that way? And what can we do to finally remedy that?

I’m enormously grateful to Volunteer Lawyers and Accountants for the Arts, our other supporting civil rights organizations, and my exceptional pro bono legal team who are guiding this case, including Dr. Laurence Tribe of Harvard University School of law; Dean Erwin Chemerinsky of the University of California at Irvine School of Law; Ms. Leah Tulin, of Jenner & Block; Mr. James Williams, of Chehardy, Sherman, Williams; and Kymberly Evanson, of the Pacifica Law Group.

I’m confident that freedom, justice and the 1st Amendment will ultimately prevail.

Thank you for all your help and support and I’m looking forward to today’s lecture.

By Benjamin Ogara Texas Tech University School of Law Juris Doctor Candidate 2022 The name of a business, product, or service is one of the most important aspects of a company. This naming process can bring up legal concerns with…

1. Take advantage of available assistance, including unemployment benefits, HealthCare.gov special enrollment (which may be less expensive than COBRA), mortgage relief, emergency grants, and loans. If you have some money set aside to play with then you may want to…

Vote ‘No’ on Proposition A

by Sue Greenberg “Please vote no on August 7.” On Monday, Jen Cody (above) and fellow cast members now appearing in The Muny’s production of Gypsy worked phone banks urging voters to defeat Proposition A. They believe, as I do, that…