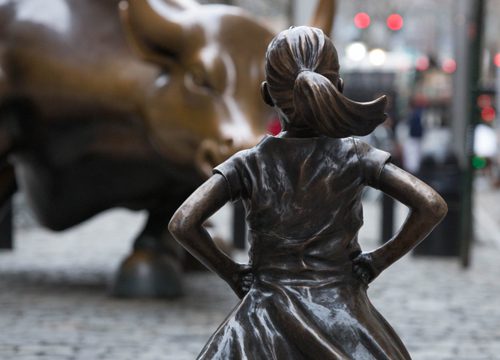 Fearless Girl and the gender pay gap are back in the news with an ironic twist. State Street Global Advisors, the firm that commissioned the crowd-pleasing sculpture as part of its campaign to increase the number of women who serve on corporate boards, recently agreed to pay $5 million to settle U.S. Department of Labor allegations that it discriminated against more than 300 female executives by paying them less than men in similar positions.

For those of us who believe in the transformative power of public art, the settlement should inspire a long overdue conversation about why women in the arts continue to earn significantly less than men and how to achieve parity.

The compensation data is readily available and, given the progressive attitudes that are usually associated with our field, it’s disheartening:

How can the gap be closed? For nonprofits, it should be easy but somehow it’s not. The method is prescribed by the IRS, which mandated “reasonable compensation” in the early 1990s, following outcries that a few high-profile CEO compensation packages were excessive. To comply, arts and cultural institutions must collect and analyze salary and benefit data from comparable (geography, budget size and mission) organizations.

This approach should be applied to every position with compensation offers based on data together with the skills, experience and value brought to the position, not on salary history. Price the job, not the person.

And women in the arts need to be as feisty as Fearless Girl when they negotiate or it will take decades to face down the charging bull.

Ethics Goes to the Movies

Monday, May 14 at 4:00 PM 2.0 Hours of Missouri CLE or CPE Ethics Credit Hosted by Armstrong Teasdale, 7700 Forsyth in the Centene Plaza Building (free parking in the garage just west of the building) Ethics training can be fun!…

1. Take advantage of available assistance, including unemployment benefits, HealthCare.gov special enrollment (which may be less expensive than COBRA), mortgage relief, emergency grants, and loans. If you have some money set aside to play with then you may want to…

1. Copyright protects original works of authorship including literary, dramatic, musical, and artistic works, such as poetry, plays, paintings, choreography, movies, songs (and computer software). Copyright does not protect ideas; it protects how ideas are expressed. 2. It’s important to…