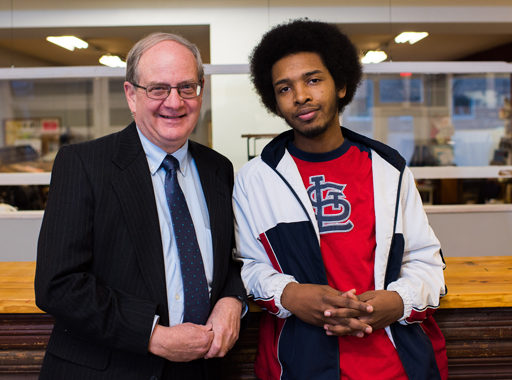 St. Louis Volunteer Lawyers and Accountants for the Arts (VLAA) will host “Censored at the U.S. Capitol: Pulphus v. Ayers and Its Implications,” a free lecture by Attorney Mark Sableman (left) on Monday, April 30, at 5:30 PM. The program will be presented in the Arcade building auditorium, 810 Olive Street, Webster University’s downtown Gateway Campus.

Pulphus v. Ayers involves the removal of Untitled #1, a post-Ferguson painting by St. Louis artist David Pulphus (right), from an exhibit at the U.S. Capitol. Pulphus, who lives in U.S. Rep. William Lacy Clay’s district, completed the painting while he was a student at Cardinal Ritter College Prep High School.

The defendant in the case, the Architect of the Capitol, who removed the work under pressure from a small group of congressmen, contended that the art competition was “government speech” and, thus, not protected by the First Amendment. Freedom of artistic expression advocates argue that art exhibits such as the annual high school art show are classic limited purpose public forums at which viewpoint censorship is forbidden and that the lower court’s decision constitutes a radical expansion of the government speech doctrine.

Sableman, a partner at Thompson Coburn LLP and longtime VLAA volunteer, will cover the far-reaching legal implications of the case, which will be considered by the U.S. Court of Appeals for the District of Columbia later this year.

Congressman Clay is expected to attend. A reception will follow the lecture.

Our volunteer accountants aren’t available to prepare tax returns for our pro bono clients between January and April. To accommodate our region’s artists, we’ve hosted free tax preparation clinics in partnership with Gateway EITC and the Davis Tax Foundation since…

Election Year Warning From the IRS

As the presidential election approaches, don't let your enthusiasm jeopardize your arts organization's tax-exempt status. Be aware that 501(c)(3) organizations are prohibited from participating or intervening in any political campaign on behalf of or in opposition to candidates for public…