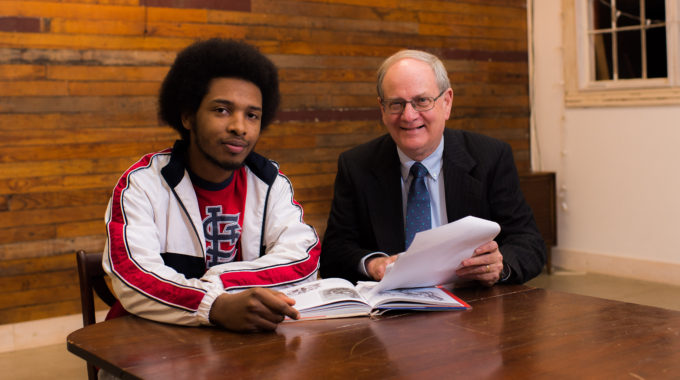 Viewpoint censorship should not be allowed of art works properly accepted in an exhibition, according to a friend of the court brief submitted by 17 arts service and advocacy organizations, including St. Louis Volunteer Lawyers and Accountants for the Arts (VLAA). The brief was filed in the U.S. Court of Appeals for the District of Columbia, urging reversal of a ruling that permitted removal of a painting by St. Louis high school student David Pulphus (above left) from an exhibit at the U.S. Capitol.

In their amicus brief in the case known as Pulphus v. Ayers, the amici noted their common interest in protecting freedom of artistic expression and expressed “special concerns about the possibility of future viewpoint censorship of core political speech in customary art exhibition venues such as public libraries, universities and government buildings (from village halls to the Capitol).”

The defendant in the case, the Architect of the Capitol, who removed the painting under pressure from a small group of congressmen, contended that the exhibition was “government speech” which the government could censor at will. But the amicus brief argues that art exhibitions such as this one are classic limited purpose public forums at which viewpoint censorship is forbidden. It would, therefore, be a terrible idea to sensor all suggestive content in an art exhibition.

“Our brief points out the inherent expressive freedom when art works are displayed in exhibitions,” Sableman explained. “Even when a government entity is involved in exhibiting or making available selections of expressive works, viewpoint censorship should be forbidden. The Supreme Court has made this clear with books in public school libraries, and the same principle should apply to art in public exhibitions.” The brief argues that the lower court’s decision permitting the censorship constitutes a radical expansion of the government speech doctrine that contravenes Supreme Court precedent and lacks any limiting principle.

Pulphus, who lives in Congressman William Lacy Clay’s district, completed Untitled #1 while he was a student at Cardinal Ritter College Prep High School. He is currently studying studio art at a leading university. 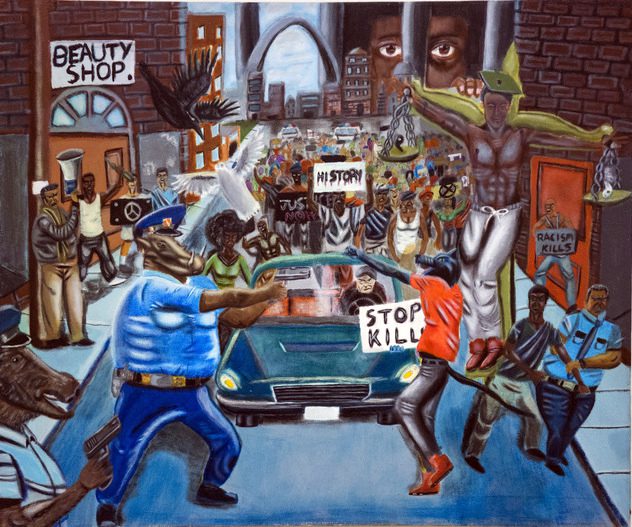 His allegorical post-Ferguson painting depicts a civil rights demonstration. It includes two police officers with boar heads; one is pointing his gun at a protester with the head of wolf. Untitled #1 was one of more than 400 works selected for display in the Capitol’s Cannon Tunnel as part of the 2016 Congressional Art Competition. Members of the House created the annual competition in 1982 for the “purpose of encouraging nationwide artistic creativity by high school students.”

Untitled #1 was chosen by a jury of independent art professionals appointed Rep. Clay and hung in the show for more than six months without incident. After several Congressmen called the portrayal of police officers disrespectful, the appellee in the case, Architect of the Capitol Stephen Ayers, retroactively determined that the painting did not comply with the competition’s suitability guidelines. He removed the work from the exhibit, effectively resulting in what is known as a heckler’s veto. Other works addressing race relations and the treatment of African-Americans by law enforcement remained on view.

The lower court found “little doubt” of viewpoint discrimination by the Architect but nonetheless ruled that exhibit was government speech, and could be censored on viewpoint grounds. The amicus brief argues that the District Court erred in the government speech designation because “the government is not “speaking’ when it creates and hosts an art competition to showcase the speech of its citizens.” It also explains, using historical example and illustrations, the expressive rights that apply even to art that involves some government sponsorship or support.

Amicus briefs typically supplement, rather than duplicate, the supported party’s legal arguments by providing context, additional information and policy arguments. In this brief, the amici make the distinction between art competitions and commissions and between art competitions and permanent public monuments. The brief also references accepted curatorial practices, as outlined in the Code of Ethics for Curators and the Museum Best Practices for Managing Controversy. It includes cartoons to illustrate the long and distinguished tradition of using animal caricatures to criticize the government. The brief also argues that the suitability guidelines, which do not allow “exhibits depicting subjects of contemporary political controversy or a sensationalistic or gruesome nature,” are unconstitutionally vague, require subjective judgments, were applied inconsistently and as a pretext to chill core political speech.

As the brief’s conclusion notes, “the censorship in the Capitol was a terrible civics lesson,” and, quoting University Georgia law school professor Sonja West, “punishing students for their speech robs our public debate of needed voices, and it teaches our children – who, of course, one day will become adults – that censorship, even broad and sometimes arbitrary censorship is acceptable.”

“I greatly appreciate the strong and principled support of the St. Louis Lawyers and Accountants for the Arts and the other amici as they join my efforts to defend the First Amendment rights of my talented young constituent, David Pulphus,” said Congressman Clay. “We are confident that the Court of Appeals will eventually vindicate not only David’s legal rights, but will also reaffirm that freedom of speech is protected everywhere, including the U.S. Capitol.”

“We’re proud to be taking an active stand on behalf of a St. Louis artist and because the ruling could have far reaching impact,” said VLAA Executive Director Sue Greenberg. “So, we were pleased to take the lead in reaching out to the national volunteer lawyers for the arts network to demonstrate coast-to-coast support for the legal and common-sense arguments made in the brief.”

The U.S. Court of Appeals for the District of Columbia Circuit has dismissed Pulphus v. Ayers, the lawsuit challenging the removal of Untitled #1, a painting by St. Louis artist David Pulphus, from a U.S. Capitol high school student art exhibit.…