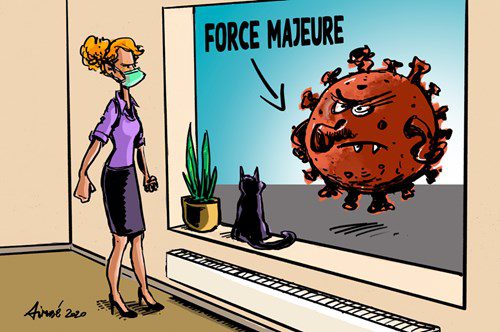 No Worries, We Got You Covered!

The coronavirus pandemic significantly affects every individual, family, and business. Needless to say, this disaster has also influenced many existing contracts either by delays or cancellations, including significant agreements requiring traveling and performing. The pandemic has also stifled numerous transactions, and many stakeholders, including artists, museums, art fairs, auction houses, and galleries have ceased to operate or been forced to re-evaluate existing and future projects. As a result, contractual parties are endeavoring to find solutions to relieve them of their obligations. A force majeure clause may help them with that.

A force majeure clause is a provision in a contract that anticipates some supervening or extraordinary event outside the parties’ control, which would prevent them from performing, in whole or in part, obligations set out in the contract. “Force majeure” does not have a default legal meaning under American law. The term ‘force majeure’ has been defined in Black’s Law Dictionary, as ‘an event or effect that can be neither anticipated nor controlled. It’s a contractual provision allocating the risk of loss if performance becomes impossible or impracticable, especially as a result of an event that the parties could not have anticipated or controlled.

Parties cannot rely on force majeure if there is no such clause in the contract. If such a provision exists, the effect of the clause depends on how the clause is drafted, and courts generally review the plain language of the contract to determine if it is applicable.

Force majeure clauses can be drafted in specific or general terms, and they can excuse a party from partially or wholly performing its obligations in a contract, permit termination of contracts, or permit its suspension. Its meaning may depend on which law governs the contract and the contract’s specific language. These clauses are risk shifting, meaning that Party A and Party B can agree that one of them will bear the economic damages of the disaster in question, or permit rescheduling or other delays until the force majeure event has passed within a reasonable period.

There are various forms of force majeure clause examples online, and contracts usually vary as to what constitutes a force majeure event outside of a few core events. Even though no party has likely included a COVID-19 clause per se in a contract, it’s fairly common to use the words “epidemic” and “quarantine”, or refer to what essentially the government has ordered as a “state of emergency”-type declaration. The core of those terms remains relatively the same, which refers to the contract law doctrine of “impossibility.” Even if the contract is silent on “force majeure”, or generally refers to “acts of God”, the continued existence of the venue is an implied term of the agreement.

So how should you decide if you still have to fulfill your obligations or whether the continued performance is still possible? Less final intervening events may give rise to a suspension of performance for a period of time with performance rescheduled. Generally, if the intervening event comprises a certain period that would be long enough to make the performance stale or undesirable, then some force majeure clauses allow for contract termination. It’s common to see such an extended period be designated as six months in the entertainment industry, which is usually designed to address labor strikes. The COVID-19 disease as an intervening event could delay performances of the contract and even make it impossible. When a governor announces a state of emergency and cancels an event listed in the contract, it is likely because of something that could happen such as a potential contagion that is anticipated to have dire consequences. Then the question becomes whether it is a force majeure event that produces economic harm.

The party seeking to assert the force majeure clause is usually required to prove that it applies, establishing that the event was beyond its control and therefore not due to its fault or negligence. Simply using the phrase “act of God” does not necessarily guarantee the desired relief.  Whether courts ultimately determine COVID-19 to be an “act of God” still remains to be seen. In early March 2020, a class action lawsuit was filed in San Diego County, California involving contract cancellation policies, and hundreds of cases hinging on whether the term “Act of God” includes COVID-19 have now been brought in courts. A landmark ruling on this issue would certainly clear the legal fog.

In the absence of a force majeure provision in a contract, parties could alternatively be excused from performance due to impossibility or impracticability. Such an argument could be raised when a party is unable to perform under a contract due to uncontrollable circumstances. The doctrine of impossibility of performance is a defense to a claim of nonperformance of a contract where facts making the performance impossible were not available to the parties before the execution of the agreement. This doctrine is applied with great caution if the relevant business risk was foreseeable at the inception of the agreement. COVID-19 will likely make certain contracts impossible, and the analysis may depend on the timing, the specific industry, and the performance. As such, whether the doctrine of impossibility of performance will provide a defense to a claim of contractual nonperformance must be evaluated on a case-by-case basis.

In summary, here are some practical considerations when you draft and/or analyze your contract and how to deal with certain COVID-19-related issues:

Finally, here is a broader version of a force majeure clause covering COVID-19; you should seek legal advice in your area.

“Neither Party will be liable for any failure or delay in performing an obligation under this Agreement that is due to any of the following causes, to the extent beyond its reasonable control: acts of God, accident, riots, war, terrorist act, epidemic, pandemic, quarantine, civil commotion, breakdown of communication facilities, breakdown of web host, breakdown of internet service provider, natural catastrophes, governmental acts or omissions, changes in laws or regulations, national strikes, fire, explosion, generalized lack of availability of raw materials or energy (“Force Majeure Occurence”). Notwithstanding the foregoing, if Artist’s performance is prevented by a Force Majeure Occurrence, but Artist is present, ready, willing and able to render its services in accordance with the terms hereof, the Purchaser shall reimburse any and all reasonable, bona fide, and documented out-of-pocket expenses incurred by Artist in connection with the Engagement.

Can Mashups like Fox in Sox Can Be Protected Under the Fair Use Defense?

By Jonnae Miller Juris Doctor Candidate 2021, Southern University Law Center Would you steal a car? Handbag? Television? Or a DVD? These are questions posed in a 47-second anti-piracy ad that was created to discourage illegal downloading and purchasing of…