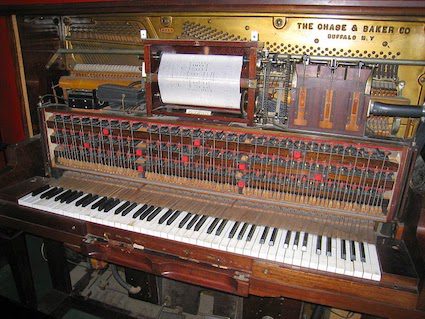 Technology makes it easier than ever for listeners to consume music, from studying for exam using Pandora to entertaining customers with the help of Cloud Cover Music (https://cloudcovermusic.com/music-for-business/apple-music-for-business/), technology has allowed music to blossom for different reasons. However, on the flipside, it has greatly complicated how creatives behind the music are paid. Though live performances are still going strong, the straightforward act of buying music has largely become a thing of the past. Recent music streaming apps such as Spotify and Apple Music come to mind. There is even software that allows you to access these types of streaming platforms. For an example, see spotify++ apk, but this issue was actually first addressed in 1908 when the invention of “player pianos” complicated the compensation of songwriters. Before recorded music was invented, songwriters essentially got paid for selling their sheet music and performers got paid for their performances – pretty straightforward.

This all changed when player pianos gained popularity in the early 1900s. Player pianos are the “ghost pianos” that you see playing songs with no human pianists in old movies, or in the more modern HBO series Westworld , which you can catch on your television by getting a cable connection (for Dish TV Packages click here). The owner of the player piano could buy different piano rolls for the piano to play different songs. This was essentially the first form of recorded music, music that could be played without a performer so that the only person to pay would be a songwriter. Seems straightforward, but it was not so in the matter of White-Smith Music Pub. Co. v. Apollo Co. (1908). In this case, the United States Supreme Court decided that piano rolls did not fit the definition of sheet music, so that player piano companies were not required to pay royalties to songwriters. Understandably, songwriters were outraged by this decision and turned to Congress, which resulted in the Copyright Act of 1909 and the creation of mechanical licenses.

Compulsory mechanical licenses include pre-negotiated automatic royalty rates that ensure the compensation of songwriters when musical recordings of their songs are made. These licenses have evolved as music technology has evolved– from player pianos, to physical records, to digital downloads, and now to streaming. However, it has not been a very graceful evolution; technology has been advancing almost too fast for mechanical license laws to keep up.

The purchase of music in physical form did not complicate mechanical royalties much: every time a CD or record was pressed the songwriters would receive an automatic, hence compulsory, mechanical royalty. However, this automatic fixed fee does not have a meaningful application to on-demand streaming because by streaming you do not own the song. Songs are not necessarily yours to keep; artists or their companies can pull them from Spotify whenever they choose, or you may no longer subscribe to the service.

To resolve the often-outdated royalty rates in the application of mechanical licensing, the Copyright Royalty and Distribution Reform Act of 2004 created the Copyright Royalty Board (CRB). The Board is comprised of three judges appointed by the Librarian of Congress who decide on a fair rate for all songwriters every five years.

The CRB considers many different aspects in determining each particular rate for each category of music service, for example whether the music service in question is supported by subscriptions or ads will change the rate. The current formula has to do with percentage of revenue or of total content cost (whichever is more) and ticks up a specified amount each year until the Board meets again after five years to redetermine the appropriate rates. Bottom line being companies like Spotify and Apple Music know exactly how much they should be paying songwriters; it is a fixed rate, not a negotiation.

Calculating the amounts due is the easy part, especially with how streaming services automatically keep records, but the big issue is actually getting the money to the songwriter. Some songs published on these streaming services are not owned by record labels or publishing companies so songwriters can be hard to find. This is where the Harry Fox Agency (HFA) comes in. HFA was founded by the National Music Publishers Association (NMPA) specifically to ensure songwriters receive their mechanical royalties. HFA is essentially a directory for all of the songwriters in the country.

If songwriters are not represented by HFA it is HFA’s job to go out and find them to enforce the mechanical license so that the persons receive their payment. Compulsory mechanical licenses like these require only that a notice of intent to use the musical composition was sent to the songwriter’s last known address (or filed with the Copyright Office if they cannot find the songwriter) so the songwriter is aware of the right to compensation. However, HFA has not always been able to keep up with the powerhouse streaming services to enable songwriter compensation, specifically Spotify, which essentially led to Wixen Publishing Company’s recent lawsuit against Spotify for $1.6 billion. Wixen alleged that Spotify outsourced the responsibility to obtain the mechanical license knowing that HFA did not have the infrastructure necessary to obtain the necessary mechanical licenses. Wixen sought the maximum award possible under the U.S. Copyright Act, or $150,000 per song, from performers like Tom Petty and the Doors. Wixen and Spotify ended up settling out of court in December 2018. The terms of the deal were not disclosed but the companies announced that they had essentially resolved the issue and had established a mutually advantageous relationship for the future.

The Wixen settlement was not the first of its kind, it was merely the latest settlement in a bunch of many Band-Aids that Spotify has placed on the issue of mechanical licenses. In a 2017 settlement, Spotify set aside $43.4 million to compensate songwriters who had not yet received royalties, but Wixen and many others in the music industry thought that was not enough to remedy its on-going illegal activity. Spotify also settled with the NMPA in 2016, the organization that essentially stands for musical artists’ rights.

The snowball of settlements may have finally stopped rolling with the recent passing of the Music Modernization Act (MMA) in October 2018, however. The MMA aims to solve mechanical licensing issues and more in attempting to bring the U.S. Copyright Act up to speed. The Act plans to create a mechanical licensing collective that will act as the official – and capable – middleman for mechanical licenses, specifically for digital services. This act allows for the Copyright Royalty Board to set different mechanical rates for different songs based on their market value. Instead of the same flat fee across the board, more valuable songs can lead to higher mechanical rates.

Lastly, the MMA aims to avoid lawsuits like Wixen v. Spotify: if a streaming service sets aside money that it is trying to get to a songwriter, it can’t be sued later for not finding the songwriter. The Music Modernization Act has received support from all sides of the controversy: record labels, songwriters, producers, performers, and even streaming services including Spotify. So, is the MMA a blanket resolution to all music copyright disputes? It will be interesting to see how the Act performs when it comes to its actual execution. It certainly won’t slow down the advance of music technology and is in fact a step in music’s modern direction.

The Future of NFTs

By Annika Eckenrode Washington University Juris Doctor Candidate, 2022 In 2007, a video of a baby biting his brother's finger, entitled "Charlie Bit My Finger", went viral on YouTube, receiving nearly a billion views since it was uploaded. Now, years…

By Nan Shen Saint Louis University School of Law Juris Doctor Candidate, 2021 Copyright rights exist once an original work of authorship has been fixed in any tangible medium. For the majority of original works, the creative standard can be…

By Kat Grant, St. Louis University School of Law Memes are everywhere. They are an inescapable aspect of pop culture. But have you ever wondered if a meme is copyrighted, or made a meme and thought can I copyright this?…