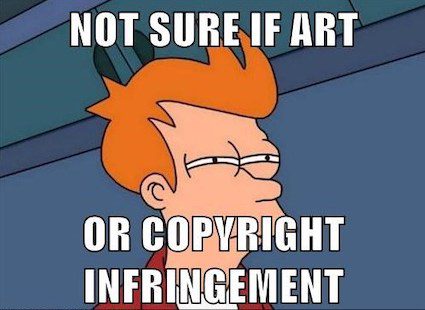 Memes are everywhere. They are an inescapable aspect of pop culture. But have you ever wondered if a meme is copyrighted, or made a meme and thought can I copyright this? Well, the short answer is it depends.

What Are Memes?
A meme can be any image or series of images (GIFs). Typically, they come in the form of an image accompanied by text. A new meme, or a new iteration of an old meme, pops up almost every day. Memes started out on platforms like 9gag and 4Chan, but now you can’t scroll through Facebook or Instagram without coming across one or three…or ten. Memes are so mainstream that some major corporations are using them for advertisements and marketing.

Do You Have Copyright in the Memes You Create?
The main issue regarding copyrighting a meme is whether all of the content is yours. If you created the image used in the meme you can copyright that, and any memes created with it would likely be deemed derivative works, or protectable works based on or derived from existing works. However, if you do not have rights to the original image then it is unlikely you would be able to obtain copyright protections. So, while it depends on the details of a particular meme, the majority of memes are not copyrightable. Importantly, the creation and use of a meme could have potential legal ramifications.

Potential Legal Issues
If the image is in the public domain, then it is unlikely to create copyright issues. However, the majority of memes are not in the public domain and are based on already copyrighted images. The popular “awkward penguin” meme raised a lot of questions when Getty Images demanded payment for picture use from the blog Geeksisters. The question still to be determined is whether the unauthorized use of this meme is really a copyright violation. In theory, original memes are also included under copyright protections. It is unclear whether or not there are exceptions to those protections, such as fair use, when dealing with memes.

In practice, it is almost impossible to fully enforce copyright protections with memes. There are so many meme generators that thousands are created daily. The sheer number of memes, plus their frequent anonymity, makes it nearly impossible to formally issue a copyright infringement warning notice on all. While it can be argued that the use of unauthorized memes should be classified as copyright violations, there are almost no court cases dealing with the issue. This leaves the legal status of memes somewhat unclear. The disputes that have occurred are usually resolved with warnings or licensing fees. The only way to completely protect yourself is to not use memes at all, or to only use those you have completely created, or those comprising public domain or licensed images.

Can You Protect Your Work Before or After it Becomes a Meme?
It is might be impossible to protect your work from becoming a meme aside from not posting any images of your work online and not allowing any photographs or video to be taken. Since for many this isn’t feasible, the only possible recourse is to send a cease and desist letter to an identifiable culprit when your work(s) become a meme or to demand a licensing fee. Either way, it will likely require legal assistance, including the possibility of litigation.