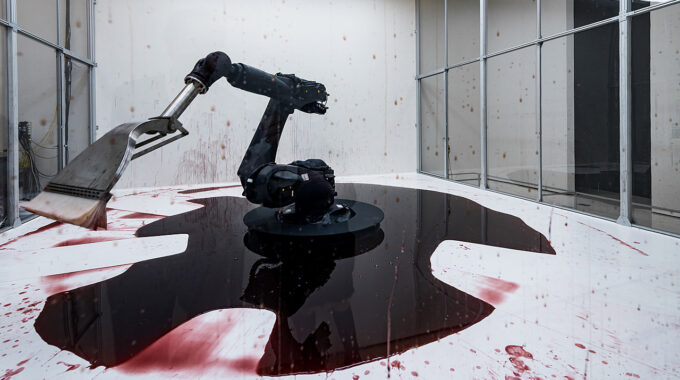 Dying, desperate, and likely afraid, the huge robotic arm frantically struggles to recapture and repurpose the life-sustaining fluid rapidly draining from its body. Can’t Help Myself (Sun Yuan and Peng Yu, 2016) is a visceral reminder of authoritarian globalism and the often-deadly result of hardcore physical and cultural divisions. It is an awe-inspiring piece, but when removed from the white box confines of contemporary art museums, it devolves into a large industrial machine breaking down over time. An odd secondary ode to industrialism, and the impermanence of life – even robot life.

Colorful, inorganic, and quoted as “vacant, not quite human” the Algorithm Queen recently painted by Ai-Da for Queen Elizabeth’s Platinum Jubilee questions the very existence of artistic meaning. But the artist is not a human. Ai-Da is the world’s first ultra-realistic robot artist, named after the groundbreaking mathematician Ada Lovelace. Although Lovelace died nearly 170 years before Ai-Da was created, her mathematical theorem set the groundwork for machinery, computers, and even artificial intelligence. Ai-Da is not just the creation of gallerist Aidan Meller, but the culmination of centuries of technological, mathematical, and artistic development fused into one semi-sentient automaton. Ai-Da can even speak and critically comment on her created artworks. But many wonder, does Ai-Da “create?”

The somewhat on-the-nose named AI “Botto” recently “made” his first million dollars selling algorithmically generated NFTs. In an intriguing creation process, Botto generates a written sentence then inputs it into a neural network and gets an image back. Think of writing a sentence yourself, then imagining every applicable piece of art you have ever seen composited together. Yet, Botto has the added benefit that his neural network has seen and categorized more works of art than any human. Further, Botto is seemingly aware of his work and may one day create music and books.

Machine Learning, Artificial Intelligence, Androids, Automatons, and Sentient Robots. All one in the same of a not-so-recent theory of created life. From cautionary tales by Isaac Asimov, to introspective questioning by Phillip K. Dick, to practical research and science by Alan Turing. Does it have life? While we may be many years from answering that loaded question, the question of ownership may be more readily available.

The machine in Can’t Help Myself, Ai-Da, Botto, and potentially even Rick Deckard (Harrison Ford’s character in the movie Blade Runner, 1982) cannot own a copyright themselves. Copyright law requires an “original work of authorship”, provided that the work was created by a human being. There have even been cases questioning if a monkey taking a selfie owns rights in the photo, or if divine or supernatural works can qualify for copyright. In the eyes of American Copyright Law, only Ai-Da’s creator can own copyrights in her work. While the question of “what is human?” envisions ideas of Voight-Kampff machines and Turing Tests, the courts of this land will likely take a more practical approach. Are they human?

Others have argued more philosophical reasons to prevent androids, et al. from obtaining a copyright. Stanford Law School professor Eran Kahana explains the reason for intellectual property protection is to prevent other parties from using the creation without permission and enabling the owner to generate a benefit. Professor Kahana argues that an AI does not have either of these needs (even though Pris– Daryl Hannah’s character in Blade Runner, 1982– might disagree).

The machine in Can’t Help Myself, is literally dying as the piece is performed. The fluid leak starts out slow then becomes faster, more aggressive, and more problematic to the robot arm. The fluid is a mechanical lifeblood for the machine. The fluid is essential to the operation of hydraulics. As the days go by, the arm becomes slower, less attentive, until eventually it dies.

Ai-Da comments on her work. She recently thanked the Queen for her philanthropy when introducing her portrait. Botto seems to understand his work, and more importantly, when and why viewers are interested or disinterested in what he creates. We even address them by their pronouns.

Today Ai-Da would not be considered a copyright holder. Botto, and other AI like him, would not be able to place a copyright notice on his NFTs. Why that might be unnecessary is for another blog. Nonetheless, the law does not recognize these androids as humans and are therefore unable to “create” from an ownership perspective. While their humanity may be forever questioned, the fact of the matter is they have created. They have created works of art, they have created commentary on it, and in the case of Can’t Help Myself, they have created a terrifying observation of aging and eventual death.

The machine in Can’t Help Myself does not fear its impending death like a human would. But if you ever get the chance to watch it, spend your time. The robot creates patterns in the fluid and splatters on the wall. But more importantly the robot invokes an emotional response. Empathy. The robot is frantic, erratic, edging on emotional. It fears.