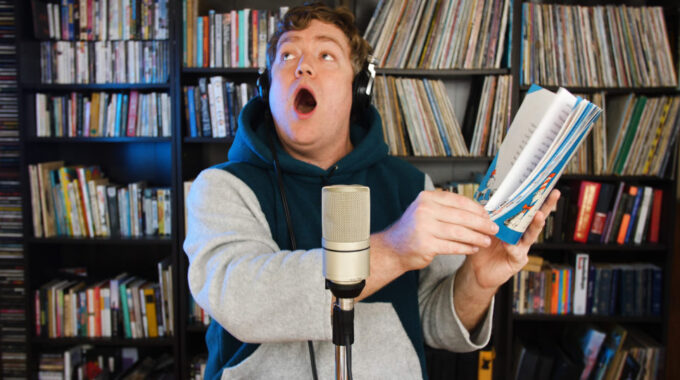 Well, you gotta admit mashups are pretty dope, but you don’t want to get sued right?

A Wisconsin man recently rapped Dr. Seuss’s books over Dr. Dre beats in a hilarious videos on YouTube. Wes Tank, a Wisconsin-based actor and comedian, became an Internet star for his spirited mashups of the works of two of the world’s most beloved doctors: acclaimed children’s book author and illustrator Dr. Seuss and rapper and producer Dr. Dre. Tank’s series started with Dr. Seuss’s 1965 book Fox in Sox , which he scored to both “What’s the Difference” – Dr. Dre’s 1999 tune with Eminem and Xzibit– and Dre’s “Let Me Ride” (“Fox”).   Wes Tank’s work is not alone. While no legal claims have yet been filed here, mashups like this might raise a question of copyright fair use, and it’s important for artists and other creators to avoid possible trouble from rights holders. What makes Tank’s case unique is that he borrowed the book content and the beats and mixed them together into a new work into his video. This memo mainly focuses on Tank’s borrowing on Dr. Seuss’s book content. Feel free to analyze Dr. Dre’s beats using the same road map.

It’s helpful to compare the other fair use cases in which Dr. Seuss was involved as a party. In Dr. Seuss Enterprises v. Comicmix, Comicmix teamed up with the former Star Trek writer to create the parody “Oh, Places You Will Boldly Go!” as a Trek-themed version of the popular Dr. Suess picture book. The Ninth Circuit ruled while defendants borrowed (liberally at times) from the Seuss work, the “elements borrowed were always adapted or transformed” by the inclusion of Star Trek characters from a unique perspective. The court ruled for defendants because the court found that it did not “copy more than is necessary to accomplish its transformative purpose.” Another case involved a parody of the O.J. Simpson murder trial written in the style of Dr. Seuss’s The Cat in the Hat. The defendant relied mostly on fair use defense; primarily that the work was a parody. The Ninth Circuit in determining the first fair use factor, found the book was not a parody. The court noted while the book “does broadly mimic Dr. Seuss’s characteristic style, it does not hold his style up to ridicule” and “the santazas have no critical bearing on the substance or style of The Cat in the Hat.”  The court ruled for Dr. Seuss because there is “no effort to create a transformative work with new expression.”

The U.S. Supreme Court in the landmark 1994 case of Campbell v. Acuff-Rose applied the four-factor copyright fair use test to so-called parody cases. In determining whether the use made of a work is fair use, the following factors shall be considered:

The first factor is the purpose and character of the use, including whether such use is of a commercial nature or is for nonprofit educational purposes. Courts focus on whether the new work supersedes the original creation, i.e., whether and to what extent the new work is “transformative.” The California-based federal Ninth Circuit Court of Appeals, as perhaps the leading court relating to the entertainment industry, later ruled that the work being challenged must add “something new, with a further purpose or different character, altering the first with new expression, meaning or message” to be fair.  In addition, the influential New York-based Second Circuit, in Walking Mountain, expanded this inquiry into whether the second work’s purpose was commercial or had a non-profit aim. In that case, the defendant had a commercial expectation and presumably hoped to find a market for his derivative work.

Fox might be considered a derivative work to Dr. Seuss’s case since Wes Tank borrowed the Seuss book’s content and rapped it out with beats, though his performance included other content such as his facial expression, the lighting, the background, and his moves. A court could very well find Tank’s effort created a transformative work with “new expression, meaning or message” since Tank merged the beats and the book together with his personal styles. On the other hand, based on limited information, it seems like Tank had a commercial expectation or he at least benefited from the series of Dr. Seuss-related videos. Before Fox, Tank’s last video only attracted six thousand views; Fox brought 4.4 million views to his personal YouTube channel, and since Fox, he consecutively created six similar videos incorporating Dr. Seuss’s works and Dr. Dre’s beats, with over four million combined views up to July 2020. The most common money-earner is through YouTube advertisements before videos. Using Forbes’s data, actual rates an advertiser pays varies, usually between $ 0.1 to $ 0.3 per view, but averages out at $0.18 per view. On Average the YouTube channel can receive $18 per 1,000 ad views. Roughly a YouTube video with one million views can make roughly upwards of $5,000. It’s hard to tell Tank’s initial intentions, but these videos certainly brought him some financial gain and popularity on the Internet. Court will likely balance between the two factors mentioned above.

The second fair use factor focuses on the nature of the work to be protected. The Ninth Circuit and other courts have analyzed whether creative works are closer to the core of intended copyright protection than more informational works, but this factor has not been as significant in the overall fair use balancing test based on the cases. It seems like the Fox-relatedworks borrowed the core of intended copyright protection from Dr. Seuss’s books since Wes Tank merely rapped their content and showed the book pages to his audience in the videos. Therefore, this factor likely weighs against fair use.

This third factor assesses the amount and substantiality used in relation to the copyrighted work. The Ninth Circuit assessed the “persuasiveness of a parodist’s justification for the particular copying done”, recognizing that the “extent of permissible copying varies with the purpose and character of the use”. Also, The Supreme Court in Campbellreasoned whether a substantial portion of the infringing work was “copied verbatim” from the copyrighted work is a relevant question, for it may reveal a dearth of transformative character under the first factor, or a greater likelihood of market harm under the forth. A work composed primarily of an original, particularly its hearts, with little added or changed is more likely to be a merely superseding use, fulfilling demand for the original. Parodists usually borrow the original’s most distinctive or memorable features. The Court ruled once enough has been taken to assure identification, how much more is reasonable will depend on the extent to which the work’s overriding purpose and characters is to parody the original or, in contrast, the likelihood that the parody may serve as a market substitute for the original. This is the case where “a substantial portion” of the parody itself is composed of a “verbatim” copying of the original. Tank used the content of the entire book, which was the heart of the original work. Tank may argue the original book was not naturally severable and he borrowed what he considered was necessary for the coherence of the video. Courts likely will combine this factor with the first and fourth one to check whether the video may supersede the original’s market including potential licensing programs.

The fourth fair use factor asks not only the extent of market harm caused by the particular actions of the alleged infringer but also whether such unrestricted and widespread conduct would result in a substantially adverse impact on the potential market for the original work. Fox as a crossover work might not supersede the original market of Dr. Seuss’s works, and the Second Circuit has determined that market substitution is less certain for a transformative work. Nevertheless, there could be a market  for licensing in that Dr. Seuss’s estate might license other authors and artists to create derivative works in audio, even in rap. So far, Wes Tank’s Youtube vignettes cover a few popular books from Dr. Seuss such as Cat In the Hat, The Lorax, and Hop On Pop. Therefore, it seems like these videos might hinder a potential licensing program later, assuming that they’re not already authorized. As a result, this factor likely weighs against fair use.

Overall, based on the analysis above, Tank could make persuasive arguments for his fair use defense and the result differs from each jurisdiction’s courts. Even though some courts may deny his fair use defense of the book or the beats, but his mixed use of these two into one video may exempt himself from the liability.

Thousands of works like Fox have appeared and will continue to be made in the future, and artists can learn from this discussion to avoid future legal disputes. Along with the four-part fair use test, artists should also consider the following specific questions: what value is added to the original by creating the new work that was inspired by it? Was the original work published or unpublished? (The scope for fair use protection is narrower for unpublished works) Have you borrowed the most significant and memorable aspect of the original work? Will the new work deprive the original owner of a substantial amount of his current income? Is the amount of material copied “de minimis” so that a court may permit it without even conducting a further fair use analysis? Will a reasonable judge or jury be offended by your work? (A more sensitive trier of fact may rationalize a decision against fair use even though the Supreme Court has ruled that the offensiveness is not a fair use analysis factor.)

by Jake Villarreal The U.S. Constitution grants Congress the power to create copyright law, which is meant to spur artistic and literary development by producing creative works. But what exactly qualifies as a creative work? The U.S. Copyright Office requires…