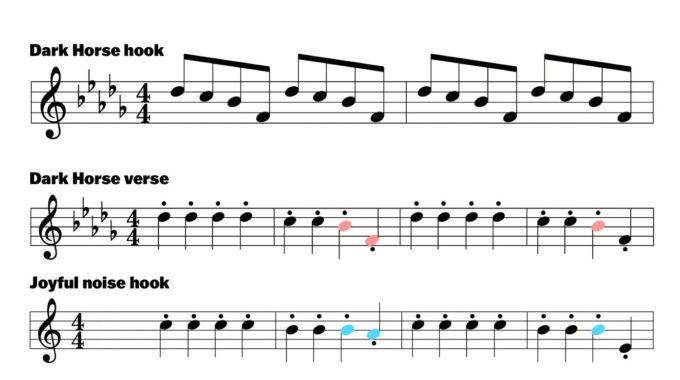 If someone created a painting using eight different acrylic paints, can someone else argue copyright infringement if their own painting was created using the same eight acrylic paints? Katy Perry’s defense attorneys effectively argued no, but they were not talking about paint. They were talking about musical notes. Specifically, a descending eight-note pattern that Christian rapper Marcus Gray alleged Perry took from his song “Joyful Noise” and incorporated into her own, the hit “Dark Horse.”

A sequence of descending notes is hardly original or even difficult to regenerate. Anyone with an electronic keyboard can mimic the note sequence in question. Copyright infringement only occurs when a copyrighted piece is reproduced, distributed, performed, or publicly displayed without permission from the copyright owner. If the segment in question is common or not unique, there shouldn’t be anything to copyright. However, in 2019, a Los Angeles jury believed the referenced eight-note pattern was indeed unique and that Perry was guilty of copyright infringement. As compensation, Perry was ordered to pay Marcus Gray $2.78 million dollars. Given that Perry’s net worth is estimated to be $330 million, a $2.78 million dollar judgment would hardly make a dent in her fortune.

This would not be the final battle for the pop star. She filed a motion to overturn the verdict or retry the case, and last year, Perry was back in court. Instead of a jury, only one judge was responsible for determining whether copyright infringement was pertinent to the eight-note sequence in question. Judge Christina A. Snyder determined it was not unique or rare enough to fall under copyright protection nor was Gray’s tune infringed by Perry’s song. The jury’s decision was therefore vacated, and Perry emerged victorious.

This lawsuit is part of a growing trend in the music industry. Over the last several years, copyright infringement lawsuits in the music context have been coming out of the woodwork at an accelerated rate. Katy Perry is just one of many musicians who have been accused of copyright infringement. Judge Snyder cited another copyright case involving Led Zeppelin’s song “Stairway to Heaven” in her decision because the defendants in that case also argued that the notes to be protected involved unprotectable common musical elements and therefore did not deserve copyright protection. In the same year that the case against Perry was brought (2014), Led Zeppelin was also accused of copyright infringement by the trust of a former member of a band called Spirit regarding the opening notes of the megahit. Unlike Perry, Led Zeppelin had won at the trial level in 2016 when the jury found no extrinsic similarity between the two songs. This case continued to be consequential on appeal. In 2020, the Ninth Circuit Court of Appeals overturned the inverse ratio rule. This rule essentially means the more an alleged infringer has access to a work, the lower the threshold is for establishing substantial similarity. This rule is problematic at the very least and it has been creating chaos in the music industry for years. In the Katy Perry case, it would have effectively meant that “Dark Horse” did not have to be significantly similar to the earlier “Joyful Noise” to be considered infringing. The appeals court in the Led Zeppelin case rejected the inverse ratio rule on the grounds that it did not align with the elements of copyright, one of which is that two works must be substantially similar for copyright infringement to occur and no amount of access could detract from that.

Katy Perry’s initial loss rattled many big musicians. The similarity between “Dark Horse” and “Joyful Noise” was minimal at best, but the jury still sided with the plaintiff Marcus Gray. This trend of bringing questionable copyright infringement cases against successful musicians is problematic for the music industry because it undermines the true purpose of copyright. The point of copyright is to protect artists and their original creations. These lawsuits hardly promoted artistic genius, they hindered it.

After a long and undoubtedly expensive six-year legal war, Katy Perry prevailed. Marcus Gray still has an opportunity to appeal Judge Snyder’s ruling but the Supreme Court’s refusal to hear the similar Led Zeppelin copyright lawsuit finally put that case to rest. Only time will tell if this will be the final outcome of the “Dark Horse” copyright saga. Until then, Judge Snyder’s ruling sends a message. Some things in life cannot be bought…or easily protected.

The Music Modernization Act: What It Is And What’s Next

by Laura Marsh The Music Modernization Act (“MMA”) is a bill in Congress on its way to becoming law. It has brought together songwriters, music publishers, artists, record labels, and streaming services in an unprecedented fashion. Even though these groups…